(Jim didn't know much about his family, as his parents separated when he was very young, and he spent most time with his father and other family in Arkansas.)

Joe, b. ?, probably in Johnson Co, TX, m. ?, r. Lone Grove, Indian Territory and Tribbey, OK, d. ? in an institution for the mentally ill. No known marriage, no known issue.

Kate, b. ?, probably in Johnson Co., TX, r. Lone Grove, Indian Territory, Tribbey, OK, and Shawnee, OK, d. ?, Buried at Wanette Cemetery, Wanette, OK. No marriage, no issue. Farmed at Wanette and Tribby, OK. (Note: An announcement for the Butler 50th wedding anniversary from the Daily Ardmoreite, July 27, 1940, lists her as an attendee, so death is after 1940.)

Tennessee Louisiana Hargrove Peacock moved her family from the area near Ft. Worth, TX to Oklahoma in 1887, after the death of her husband, William "Billy" Peacock. They farmed near the Brown School, eleven miles east of Healdton, OK. It was there that Minerva Ann met Jim Butler, who was working on farms in that area. They were married at Tenzy Lou's home in the Keller-Newport area, Indian Territory, on July 28, 1890. The Butlers lived on rented farms before they could buy a farm of their own near the Brown School.

The Butlers celebrated their 50th wedding anniversary on July 28, 1940, at Healdton, where they had lived since 1935. Jim died in 1944, and Minerva (or Granny, as most people in Healdton called her), lived on in Healdton near many of her children, and was visited frequently by her grandchildren and great-grandchildren until her death in December, 1960.

Information from Ruth Butler Clark about her brothers and sisters:

Bessie Dean married John Bromley, who owned an oilfield supply store in Clemscott and a clothing store in Healdton. Kathleen Louise was born in the house at 509 Magnolia in Healdton. John Bromley died in 1938. Bess had some land with an oil well and pecan trees on it, somewhere in the south part of Healdton.

Fred Butler served in World War I, fighting in France. After his return, he worked in the oil fields of Oklahoma, Kansas, and California. He and his wife Margaret moved to California, where she worked as a cook and he as a gardener for a wealthy family. Fred and Margaret separated in California (divorced?), and Fred lost touch with his family for many years. He became ill and was at the Veterans' Hospital in Yountville, CA, when someone called his brother Otis to let the family know about his illness. He was finally reunited with Mildred, Lorena, Ruth, Otis, and Pete before he died.

Otis also served in World War I. He worked as a bookkeeper for the Roxanna Oil Company at Dillard and Wirt, then moved to Kilgore, TX and later Houston, where he worked for the Hughes Tool Company. Of his five marriages, only the last wife's name is listed -- Sybil Honeycutt of Houston, TX.

Frank worked in the oilfields all his life. He never married, and spent all of his money on women, clothes, and cars. He lived in a mobile home at Vidalia, LA (across the Mississippi River from Natchez, MS), and was burned to death when it caught fire. Brother Otis was called to Vidalia, and a lady friend of Frank's offered a gravesite in her family's plot to Otis for the burial.

Celeste Lee's husband Arthur Drake owned a jewelry store on Main Street in Healdton. They met when Sookie worked at John Bromley's clothing store. The two ran the store until Arthur's death in 1949, and then Don Drake ran the store with his mother. They purchased Peden's Jewelry, on Main Street in Ardmore, and moved the business. Celeste retired and sold her share of the stores to Don in 1983. Don has since sold the store and retired.

Lorena worked as a sales clerk at Samples, Hilton's, Wacker's and Massad's Dry Goods, all in Healdton. When Drake's Jewelers moved to Ardmore, she ran the Healdton store on Main Street until it was sold. Coonie didn't learn to drive until late in life. A story was once told that Coonie never married because her beau was killed in the Great War. She took care of her mother Minerva until her death in 1960. Coonie was a devout Primitive Baptist, like her mother, and did many things for the Baptist Church in Healdton.

Tenzy Ruthe was named after her grandmothers, Tennessee Louisiana Peacock and Ruth Butler. She attended the Brown School until the 8th grade. She met Ben Clark through social events at the Brown School, and they often walked home together. She won a scholarship to the Ardmore Business School for guessing how many words were on a front page of the Daily Ardmoreite. When she finished business college, she went to work as an information operator and long distance rate billing clerk for the Southwestern Bell Telephone Company office in Ardmore. In later years in Healdton, Ruth would sometimes work at Drake's Jewelers in Healdton for her sister, Lorena. Ruth insisted that her given name was not Tenzy Ruthe, but was Ruth Tenzy. (I have no birth certificate, and one may not exist since she was born before records were kept by Carter County. She told my father that it was Tenzy Ruth in 1984, when she gave him an oral history of the family. She told me it was not so in 1995, when I asked her on her 90th birthday.)

Dorris Paul died after a long battle with emphysema and high blood pressure. He and his wife were referred to as Dorris and Mrs. Dorris. Dorris was drafted into the U. S. Army, and worked with a construction unit at Schofield Barracks in Hawaii. He worked for many years as a diesel mechanic for Halliburton Oil Well Cementing Company in Duncan.

Mildred and Burl Culwell were married for only a year or so. Minnow operated a beauty shop in Healdton, in her parents' home where she lived with her sister Coonie. After her daughter Shirley married Ken Crew and bore daughters Keri Ann and Tamara Lynn, Minnow moved to Oklahoma City and opened a beauty shop in her house. She retired in 1976 and moved back to Healdton. She lived there with sister Lorena, and then the two bought a house in Ardmore. When Minnow's daughter Shirley became ill from heart disease, the two moved to Oklahoma City. Shirley died of heart-related problems in 1996, shortly before her aunt Ruth. Lorena died soon after. Minnow still lives in Oklahoma City near her granddaughters and great-granddaughter Ryanne Michelle Hampton (Keri's daughter).

Pete Butler was disabled by an oilfield accident, and was unable to work for many years. His death was the result of suicide.

Selmer Butler was part owner of the Ardmore Daily Press, and also worked at the Daily Ardmoreite after his newspaper failed. He also worked as a bookkeeper for automobile agencies in Shawnee. 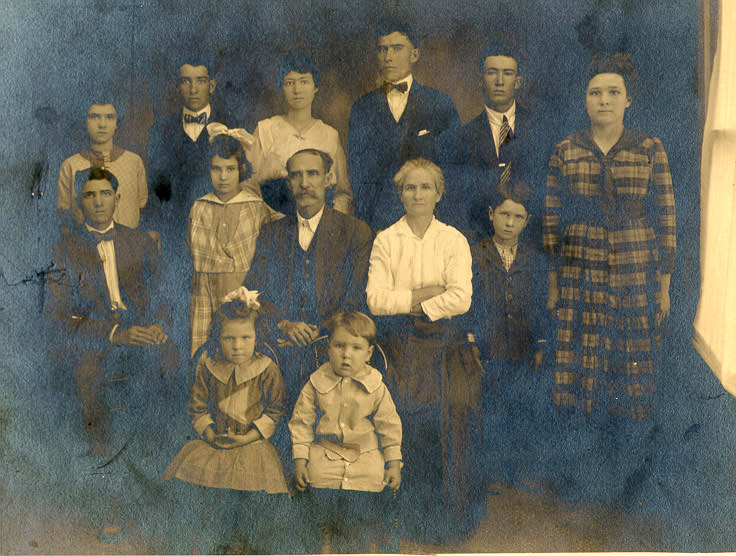 Front row: Mildred Alberta and James Ralph. From a photo taken in 1916.